For my preliminary work, my task was to create both a front cover and a contents page for a school magazine. This is preparation for the upcoming music magazine we are each going to create which will be our main AS project.

Firstly, me and a group of friends went around school with a camera to take pictures to place onto both our covers and content pages, these included things like students and teachers using the general facilities of the school. I decided that i didn't want too many pictures on the front cover because otherwise it may look too crowded.

For my front cover i tried to keep it within an appropriate colour scheme mixed around yellows and blues since these are colours of the school. I decided to try and keep the front cover bright and appealing to the audience in which are students of the school; they're more likely to be attracted to something that looks bold and bright rather than somehing that's dull and boring. A background image of the school has been added since it looks more interesting rather than a plain block colour background, this is so the audience has a good impression straight away. I made sure to put a model of a student on the cover so it feels like the students of the school are involved with the magazine. She also represents the  story line about sixth form by wearing a sixth form outfit.

I chose a bold simple font so it is easy to read and notice and I used different sizes to emphasis certain words (this is also a usual convention of a magazine). I also added social network icons showing that students have the ability to quickly find out more information with them. Since it is aimed for teenagers, I thought this was the appropriate thing to do since most will be on social networking sites daily. I didn't add lots of cover lines because people can just look at the contents page for more information.

Small pictures have been added with some of the cover lines since this is a usual convention of a magazine, the pictures give an extra insight of that particular story line and make the viewers notice it more and possibly more interested. I decided not to type up 'Heworth Grange' since it is already involved in the background image so i thought it would look confusing to have them twice. I used the school logo at the top so that there's something for people to recognize the magazine by, this is next to both the issue number and date so readers can keep up to date with both aspects. 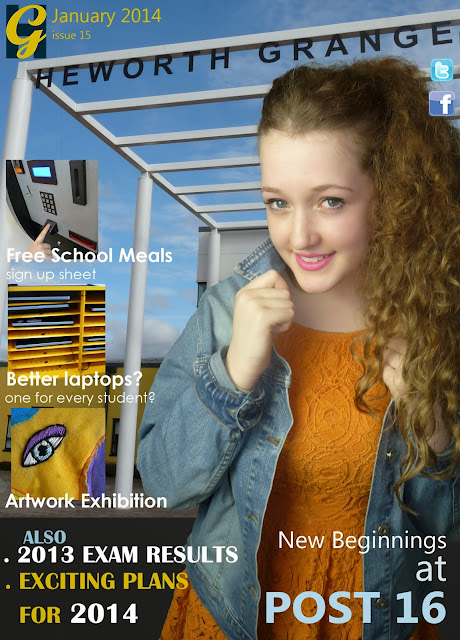 For my contents page I tried to keep it continued with the same house style of colours. I decided to make it look more interesting than a average list since again, this is aimed for young people and since it's a free magazine it has to have the ability to make people actually want to read it.

Since this is a school magazine rather than any other i decided to keep the wording of whats on each page limited because lost of students probably wouldn't have the patience to read lots of drawn out sentences while trying to see what's inside that certain issue. By keeping it to simple words, the students themselves can find out more by actually flicking through the magazine. I have only added pages in which are to do with school so it stays appropriate, most pages will be useful for  students as they update certain information and show important things for students.

I added pictures as this is a usual connotation for a contents page and shows an extra insight of the magazine, These pictures are always to be pictures of the school, teachers or students. Again, by adding pictures of students within the magazine it makes them feel more involved. The reason i did not add words with the pictures is because i think most of the time the picture can speak for itself and it would also look too crammed.

The Heworth Grange logo has been added to add an extra bit of brightness to the page. Since it is indeed the school's logo, I think it's appropriate to make sure it's shown throughout the magazine. The text is mixed up both vertical and horizontally; big font and small but still bold enough to read, I think this gives a more interesting view to the page. The colours stand out against the white block background which is important as they need to be bold enough for people to notice them. To improve i could have made the text more inline with each other and perhaps used a brighter colour for text; Perhaps even used a mixture of colours. 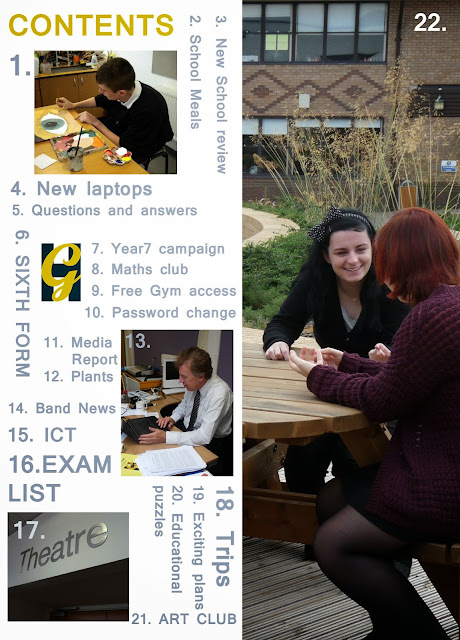 Posted by danielle louise oliver at 16:09